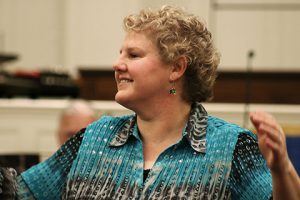 Eileen Young performs as Principal Bass Clarinetist in the Winston-Salem Symphony and as Principal Clarinetist with the Salisbury Symphony.  She is the former Bass Clarinetist with the North Carolina Symphony. Eileen was the Salisbury Symphony featured soloist in October 2009 with her performance of Persis Vehar’s “City of Light” Concerto for Clarinet and orchestra. Reviews of the concerto claimed that she “…played with great virtuosity” and “… sailed confidently and unperturbed through each challenge.” Her performance interviews were featured on WFDD in Winston-Salem and on WDAV in Davidson, NC. Eileen performed James David’s Auto ’66 Concerto for Clarinet in April 2013 with the Wake Forest University Wind Ensemble.

In 2004 and 2006, Eileen completed successful tours of France as clarinet soloist and accompanist with the Forsyth Country Day School choir. Eileen performs regularly throughout the region on various chamber recitals as clarinetist with the Winston-Salem Symphony Educational Woodwind Quintet and the newly-formed Elektra Winds woodwind quartet. Eileen is the Clarinetist/Teaching Artist and a founding member of the Bolton Woodwind Quintet, currently in residence at the Arts-Based Elementary and Summit Schools in Winston-Salem. Eileen teaches private lessons at her home studio in Winston-Salem.

As Instructor of Clarinet, Saxophone, and Woodwind Ensembles at Wake Forest University, Eileen taught many student prize winners of the Giles-Harris and Concerto competitions. At Wake Forest, she also formed and conducted the Clarinet Quartet and Clarinet Choir. In addition, Eileen coached the WFU Premier Saxophone Quartet, a winner in the 2013 Concerto Competition and featured ensemble on three Student Showcase Recitals. In April 2010, her student WFU Clarinet Quartet performed the American premier of Italian composer Guido Arbonelli’s “Immagini da Auschwitz.” The performance project was featured in articles and interviews on “Window on Wake Forest,” the Wake Forest University Magazine, and in the Winston-Salem Journal.

After a lengthy search, Eileen was named Music Director of the Salem Band in May 2011. Established in 1771, Salem Band is one of the oldest community bands in the nation. Since joining the organization, Eileen has overseen substantial increases in audience size, budget growth, season sponsorships, and band membership. Salem Band currently performs 5 outdoor and 3 indoor concert programs per season and includes 65 member performers. Eileen also instituted sponsored ensembles, including the Salem Swing Band (which she also conducts), Salem Saxophone Quartet, Salem Band Tuba Quartet, and the Salem Wind Quintet, and she serves on the Board of Directors.

Eileen recently directed a successful campaign to raise over $31k to send Salem Band to Washington D.C. to perform in the Capitol over Memorial Day weekend in May 2015. Salem Band regularly collaborates with other community organizations (Democracy NC, Sunnyside Ministry, Carolina Garrison), the UNC School of the Arts, and local and regional solo artists.

Eileen received the Doctor of Musical Arts and the Master of Music degrees in clarinet performance from UNC Greensboro where she was a winner in the Concerto Competition. She received the Master of Music degree in saxophone from the UNC School of the Arts and the Bachelor of Science degree in Music Education with Instructional Certification from Messiah College, where she won the Second Annual Keith Kuhlman Performance Competition. Her principal teachers include James Houlik, Robert Listokin, Daryl Coad, Craig Whittaker, Kelly Burke, William Higgins, Beverly Butts, and Frank Stachow.

Eileen can be heard on recordings with the North Carolina, Winston-Salem, and Western Piedmont Symphonies, Kindermusik International, and the Forsyth Country Day School Choral Ensemble.  She is the recipient of two Emerging Artist grants from the Greensboro United Arts Council, numerous faculty and course development grants at Wake Forest University, and several grants through the Winston-Salem Foundation. Originally from, Pennsylvania, Eileen grew up performing in community bands in Lancaster County as part of the Music Performance Trust Fund. 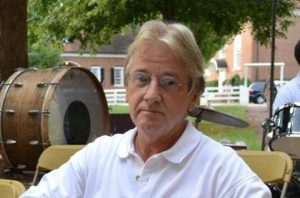 Jeff Whitsett joined the Salem Band in 1972, became its Director in 1992, and retired to become Director Emeritus in 2011.

A graduate of the New England Conservatory of Music, Jeff is a former public school music teacher, private instructor and a life-long Moravian. He is a charter member of the Piedmont Wind Symphony, serving 25 years as Principal Euphonium and Associate Conductor. A former Vice-President, Regional Marketing Manager for a national print music distributor, he managed their NC branch for more than 23 years. Currently Jeff serves as Director of Moravian Church Bands in Winston-Salem and as Personnel Manager/Librarian of the Winston-Salem Symphony. Originally from Winston-Salem, Jeff now calls Mount Airy home where he lives with his wife, Beverly Huffman.

Salem Band Board of Directors

Make a Donation and Help Support Our Mission

Thank You to Our Sponsors